NOAA provides a number of nautical publications for use in safe navigation. 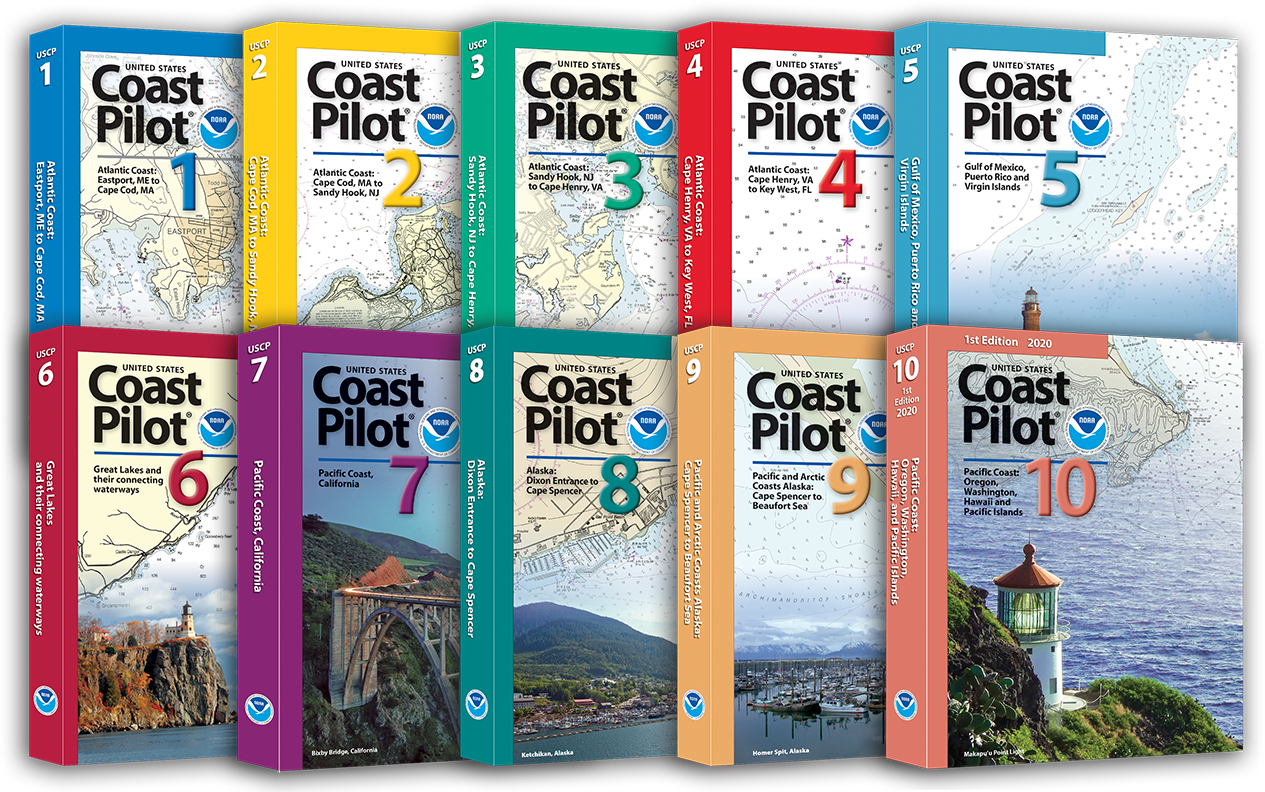 The United States Coast Pilot® consists of ten volumes of nautical books that cover a variety of information important to navigators of coastal and intracoastal waters and the Great Lakes. New editions are issued annually, however, the online versions are updated weekly.

U.S. Coast Pilot books contain supplemental information that is difficult to portray on a nautical chart. They cover a variety of topics, including channel descriptions, anchorages, bridge and cable clearances, currents, tides and water levels, prominent features, pilotage, towage, weather, ice conditions, wharf descriptions, dangers, routes, traffic separation schemes, small-craft facilities, and federal regulations applicable to navigation. Additionally, all volumes of the Coast Pilot contain a copy of the Amalgamated Navigation Rules and meet the carriage requirements to have a copy of these rules on board.

All Coast Pilot books are available to download for free, with the PDF version meeting carriage requirements. Hard copies of the Coast Pilot can be purchased from NOAA Certified Coast Pilot Distributors, and are up to date at the time of printing.

U.S. Chart No. 1 describes the symbols, abbreviations, and terms used on nautical charts. It is produced by NOAA and the National Geospatial-Intelligence Agency (NGA), and details the symbols used for both paper charts and their analogous digital products. This includes NOAA raster navigational charts (NOAA RNC®), as well as the symbols used to portray NOAA electronic navigational charts (NOAA ENC®) data on Electronic Chart Display and Information Systems (ECDIS).

Free copies of U.S. Chart No. 1 are available to download as a PDF and can also be purchased from certified NOAA distributors.

Distances Between United States Ports contains distances between ports in the United States, and between U.S. and Canadian ports on the Great Lakes and in the St. Lawrence River. The reported distances are measured along navigable tracklines and show the shortest route that safe navigation permits between two selected ports.

The USCG Light List is published in seven volumes; each volume corresponds to a different regional area and contains more complete information on each aid to navigation than can be conveniently shown on charts. This publication and the data contained within it is maintained and published by the USCG.

Light Lists corrected through the current Local Notice to Mariners (LNM) week are available in XML and PDF on the Weekly Light List Page.

LNMs are updated weekly and are available for download as PDFs.

The US Notice to Mariners (NM) provides timely marine safety information for the correction of all U.S. Government navigation charts and publications from a wide variety of sources, both foreign and domestic. To ensure the safety of life at sea, the information published in the Notice to Mariners is designed to provide for the correction of unclassified nautical charts.

The U.S. Notice to Mariners corrects National Geospatial-Intelligence Agency and NOAA charts using information collected from many sources, among them the USCG LNM. The NM will contain only those chart corrections of interest to ocean-going vessels.